We don’t often think about stage spanking in terms of its sound, perhaps because most often we encounter it after the event through still photographs which make us focus instead on the look and (if you’re like me) the quality of the OTK pose. Even a Youtube video won’t give us a true impression of the aural side of a live performance as the noise of slapping and squealing echo through the auditorium!

But the sound is also an important component of the overall impact of a scene. (For a memorable example, see here.) Just what care a theater company will sometimes take over this may be illustrated by the August 2013 production of Kiss Me Kate at the Clackamas Repertory Theatre in Oregon City.

Merideth described this as her favorite moment in the show:

‘Leif and I had a great time working out the fight scene amongst Shakespeare’s text. I get to slap him five times and it ends with him spanking me.’

We’re glad you enjoyed it, Merideth!

This was one of those productions where the actors wore radio microphones. Like most electronics, the kit comes in black as standard but is also available in a flesh-colored version that will appear less obtrusive when worn on the performer’s face:

(If you’re having trouble seeing it, the mic is on the ‘stalk’ on her cheek, dead center of the picture.)

Now, let’s look at an earlier moment in the ‘fight scene’, which might possibly make us less disappointed that this Fred didn’t lift this Lilli’s skirt to spank her. 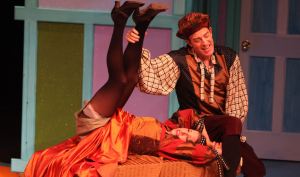 But let’s take a closer look at something else: 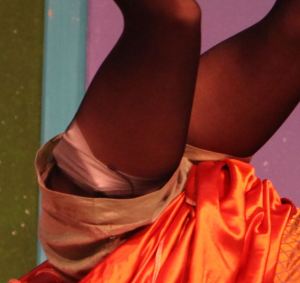 She’s wearing a second radio microphone! That’s why the bandage is around her thigh, to hold the battery pack in place. But the mic itself, this one in standard black, is curling over the top of the white binding.

Now, whyever should she need a microphone down there? Surely it can only be that they wanted to ensure crystal clear sound when it came to this scene!

Applause (at both ends), please, for Merideth Kaye Clark!