I have always felt it is important for us to maintain a clear distinction between smacking and spanking.

Smacking is essentially informal, ‘off the cuff’, and the girl’s bottom is slapped, in effect, ‘as found’. In contrast, spanking is formal: the girl is picked up and physically upended, usually across someone’s knee, specifically in order for her bottom to be punished. Smacking might entail just one slap, though there’s no reason why there couldn’t be more, whereas a spanking, after all the effort of putting the girl into position, necessarily involves at least the intention to administer a whole series of slaps, even if an interruption may mean that only one actually falls.

To give a familiar example, in the Ashton choreography of La Fille Mal Gardée, Lise first gets smacked by her mother and then, when that proves not to have been enough, she gets spanked (but is saved from the full rigor of maternal justice by the unexpected arrival of Farmer Thomas).

I used to think that we, as a subculture, were so eager for material that we collectively opted to use the word spanking to refer to any and every kind of blow on the bottom – and thereby debased our own verbal coinage. But the truth is more complicated. There has always been a lot of ‘bleeding’ between terms, even in common usage.

Take the passionless institutional forms of corporal punishment that entail making a girl bend over to be struck with an implement. I don’t think of them as spanking, but rather as caning and paddling, after the respective implements used (and, as it happens, I’m not very interested in them). Yet in the US school system, paddling is widely known as spanking. And conversely, take this famous line: ‘You keep on acting just the way you’ve been doing, and I will give you the paddling of your life and right on stage.’ So far as I know, no paddle is ever used in Kiss Me Kate: what Lilli gets is undeniably a spanking!

And, guess what? Some ‘semantic bleeding’ is useful, too. When I want to talk about the individual component blows of a spanking, the word smack is often my first choice. Slap is also useful but rather more antiseptic, but the other options just don’t cut it for me: swat is something you do to flies and for some reason I’ve never been convinced by spank as a noun.

But the bottom line is that we have to know what we mean by the words we use. Talking about a girl being spanked when she’s actually only being smacked merely sets us up for disappointment: it raises expectations of an actual spanking when what’s on offer is something different, and arguably something less.

So in all my posts, I shall strive to differentiate between smacking and spanking. Let’s illustrate that visually. This is a girl being smacked: 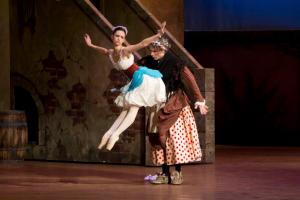 And this is a girl being spanked: 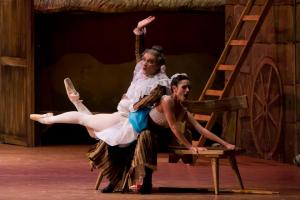 (To be precise, they are both Lili Felmery in the 2012 Budapest production of Fille.)

As Fille proves, a spanking is a step up from a smacking: it’s less casual, more meaningful for the participants, more of an occasion – and a lot more exciting to watch!