We have previously had occasion to observe that fairytale kings who have spoiled princesses for their daughters tend to be clueless about how to deal with them. Witness the extended careers in naughtiness of Princess Tusnelda in The Swineherd, Princess Dulcie in Three Fairy Godmothers and – surely the prime example – the unnamed Princess who pretends to have lost the power of speech in Honza Malem Kralem. It’s only the arrival in the story of a young man, often with a strong right arm, that puts the bad girl on the road to nemesis.

So you might think the odds are stacked in favor of the mischievous Princess Anka. She’s the central character of O chudem kralovstvicku (The Needy Kingdom), a Czech fairy tale by Josef Lada which has often been dramatized for the stage, and also in a TV movie adaptation by director Vlasta Janeckova that was shown on Christmas Eve in 1979. In the theater it has had various different titles, including The Naughty Princess and The Robbers and Princess Anka; but the version that claims our attention today was called simply Princess Anka.

The script was by Ivana Becvarova, who also directed the amateur production which opened in Prachatice on March 23, 2013, with 19-year-old Jaroslava Koskova in the title role. The story starts with a Princess prank that leads to the Fire Service being called out unnecessarily. But the King her father, played by Petr Pankratz, seems not to be quite such a softie as his royal equivalents in other tales. He keeps getting complaints about his daughter, who has been treated too indulgently by her nanny and the Queen: ‘The girl’s every naughtiness is excused,’ he says. At the start of the next scene, he declares that Anka must be punished.

Naturally Anka’s only hope is the continuing indulgence of her nanny and the Queen, and she hides behind them. But the King asserts his regal authority, overrules the doting women and gives Princess Anka exactly what she deserves:

What’s curious about this is the order things are done in. The Queen and nanny have to watch their spoiled darling getting the exemplary punishment of a good spanking, and then the King shoos them from the room and makes an effort to reason with Anka. When that fails, she’s grounded – so the spanking comes first and the lesser options follow afterwards. Maybe the King isn’t as effective a disciplinarian as he thinks! Because Anka then escapes and the play takes off, with encounters with robbers and a demon and a faked kidnapping, all working to teach her a much fuller lesson than she learned across her father’s knee!

The spanking sound effects are, of course, provided from offstage, with the amusing consequence that they briefly continue after the Princess is allowed to get up!

Despite such trifling glitches, the production was a hit, won an award and was performed again all over southern Bohemia during the next year. Here’s the King dealing with his daughter in Prachatice on September 13: 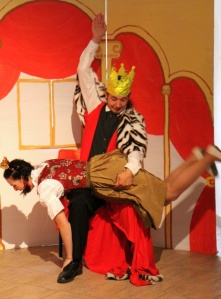 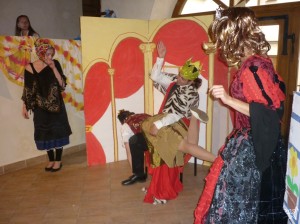 And in Stachy on October 13: 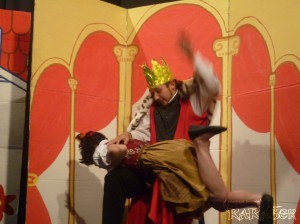 Ivana Becvarova’s script draws strongly on one previous version of the story: the 1979 television adaptation in which the King was played by Zdenek Díte and Princess Anka by 24-year-old Veronika Freimanova. 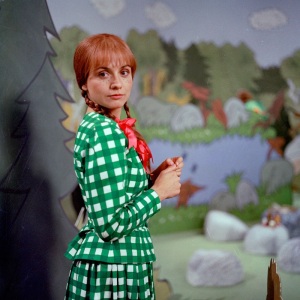 This is another version where the Princess gets spanked – and in a very central European way, too: 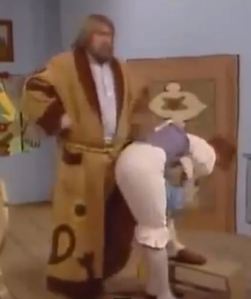 And if it’s odd that the King spanks her first and grounds her afterwards, there’s another curious thing about the way this one is played. It When the King motions her to bend over his knee, she herself whisks up her dress before doing so, as if she already knows the routine that spankings are given on the seat of the bloomers and not on the seat of the skirt. But this is a girl who has never been spanked in her life before, and that point is reinforced by the way she reacts to the first smack: it is, shall we say, not a spanking that lasts very long. So the performance assumes that she is both experienced and inexperienced with spanking, at one and the same time!

Maybe it’s best not to analyze it too deeply. So let’s just enjoy the video:

And remember to watch all the way to the end…

… when the naughty princess gets spanked again!

For another stage version, go here (but be ready to be underwhelmed).

One thought on “Princess Anka”