‘Before I can go any further, I have to get rid of the maracas.’ A simple stage management job during Madonna’s 2015-16 Rebel Heart Tour developed into a memorable and much enjoyed feature of the show. Madonna came to the end of an Eighties Latino medley with maracas in her hands, and her next number was a guitar solo. The guitar would have to be brought out to her, but how should she dispose of the maracas?

Well, obviously, throw them behind her and let her dancers deal with them!

Before we can go any further, I have to emphasize that this was a small part of a spectacular show that featured many other delights. There were pole-dancing nuns in the ‘Holy Water’ number… 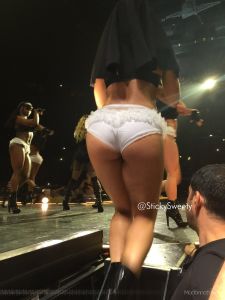 who occasionally got their bottoms smacked:

Even Madonna took her turn:

And, in Brisbane, towards the end of the tour, she sang a familiar number that was really tempting fate: what else but ‘Hanky Panky’!

But we’re getting ahead of ourselves. Back to maracas. And, more to the point, dancers. This show featured nineteen dancers from different backgrounds. Only eight of them were girls, and (so far as we know) only four of them are directly relevant to our story. Let’s meet them. 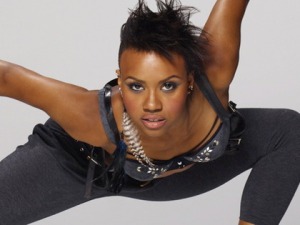 Ai Shimatsu is from Japan.

And so is Maria Wada.

At first, maraca management was just a bit of silly fun and a chance for Madonna to engage the audience by getting them to count down in unison and say something rude. But as the first leg of the tour made its way westwards across Canada, it became a forfeit game for the dancers. In Edmonton, Alberta, Madonna announced that if anyone failed to catch the maracas, whether boy or girl, they would be required to remove their shirt. Next stop was Vancouver on October 14, and the stakes got higher: the dancer who dropped the maracas would be spanked! And that night, Allauné… dropped the maracas!

Maybe in Vancouver, with its wealth of fetish nightclubs, onstage spankings are such a familiar sight that nobody thought this worth videoing. It was another matter when the tour reached San Jose, California, on October 19. This time it was Sasha who fumbled the maracas: 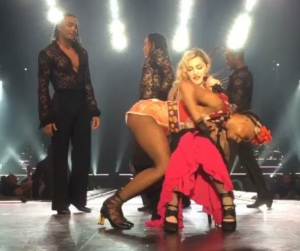 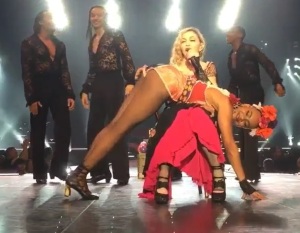 And the video cameras went wild!

The second leg of the tour took Madonna and her maracas to Europe, but little of interest seems to have occurred, except in Cologne on November 4. Unfortunately Ai caught the maraca that flew her way… but Madonna called her out anyway, put her over her knee and gave her a token slap. ‘That’s just  for the picture,’ she said. What a pity no such picture has surfaced!

If you’ve been watching the videos, you may have noticed things evolving, with the introduction of an alternative penalty: a butterfingered dancer could choose to pay a fine instead of being spanked. But on the third leg of the tour, back in the Americas, they decided to cut out that option. When Allauné dropped the maracas in Mexico City on January 6, Madonna began by telling her she had a choice. ‘Oh no,’ she corrected herself, ‘you don’t have a choice.’ Which was bad news for Allauné, and good news for us.

Another innovation you’ll have noticed is that all the dancers join in. So why, when it came to the maracas game in the next performance, did Madonna remark, ‘My hand hurts so much from spanking Allauné last night, that there will be no spanking’? Maybe they just didn’t feel like it that night!

Often there was no spanking because the dancers caught the flying instruments. And sometimes the outcome was a fix. In Miami, Sasha dropped a maraca and was called out – ‘Everybody wants you to get a spanking,’ said Madonna – but she was saved by collective action from the other dancers. And in San Antonio on January 10, Maria didn’t drop anything, but her colleagues still volunteered her for a turn over Madonna’s lap, because it was her birthday!

After that, the show headed to the southern hemisphere. We don’t know of any maraca mishaps along the Pacific rim, but once the tour touched down in New Zealand, Allauné was back on maraca-dropping form. Here’s what happened in the show at Auckland on March 6:

Over to Australia now, and on March 19, in Sydney, Sasha dropped the maracas for the third time in 81 shows. If you’ve been paying attention, that means (unless Madonna was counting Miami) that she was spanked somewhere between San Jose and Sydney that we don’t know about. ‘You want a spanking,’ Madonna told her. 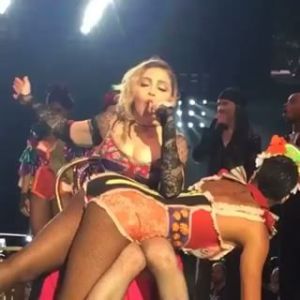 But maybe not that much of a spanking, because Sasha gave her age as 14 in an effort to reduce the number of smacks she was due to receive. Or… surely she wasn’t referring to a notorious incident in Brisbane two days earlier when Madonna invited a young member of the audience onstage and accidentally exposed a nipple when pulling down her top… was she? Bad girl! ‘I’m doing good with minors these days,’ said Madonna, rising to the bait. And raising Sasha out of the jailbait category, she upped the ante to 15 so the naughty girl got ‘that extra bit of slap that you need’.

The last show, still in Sydney, was on March 20. And this time the dancers had a surprise for Madonna:

A big surprise, actually. Because one thing that had no part to play in the spanking was… her skirt! 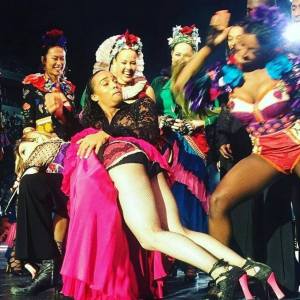 In reality, of course, nobody did anything at all to Madonna that she wasn’t expecting or didn’t welcome, especially since this particular performance was being filmed for a DVD… but even so, she makes a good show of struggling unsuccessfully to keep her skirt down!

So how does it all tally up? In a grand total of 82 shows we’ve got seven documented spankings, plus an eighth that may have happened (but we know not where), plus another spanking that almost happened. It’s an impressive strike rate of around 10%. Top place goes to Allauné, not just because she got three spankings that we know about, but also because in Mexico City she was so injudicious as to give her true age, 25, and thereby got herself the longest spanking of them all! Sasha may also have had three, putting her in line for equal top, but we only actually got to see two of them. Bottom marks go to Ai for her almost unmarked bottom in Cologne, while Maria gets an honorable mention for her undeserved San Antonio birthday spanking. But the undisputed spanking queen of the Rebel Heart Tour has got to be the only one who was spanked, gloriously, on the seat of her panties: 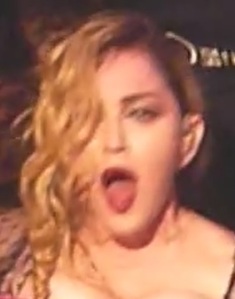