Dateline 1904. The Smith family, residents of St Louis, are looking forward to the opening of the World’s Fair. But Mr Smith comes home with some bad news. He’s been given a promotion. He’s been given a raise. Bad news? Yes, because he’s being sent to run the company’s offices in New York. The whole family will be moving away from their friends and their familiar life in Missouri. And they will miss the World’s Fair!

That is the plot of Meet Me in St Louis, Sally Benson’s 1942 novel which was dramatized as a film musical in 1944 and then, in 1947, as a non-musical stage play by Christopher Sergel, whose other work included the stage version of Men are Like Streetcars. The book was later adapted for television twice, in 1959 and 1966, and the film became a Broadway musical in 1989. So there have been a lot of different Meet Me in St Louises over the years!

It is Sergel’s 1947 version that concerns us today, for two reasons. Firstly, because it includes an onstage spanking scene. Secondly, because, being a stage play, it’s bound to be to some extent less naturalistic than a movie or television version, and, being a stage play written specifically for high school production, the characters will, irrespective of their ages in the story, all end up being played by performers in their late teens. And that’s important because, of course, the one who gets spanked is the youngest daughter of the family, Tootie Smith. We won’t inquire too far into exactly how old she is supposed to be, just enjoy the fact that in production the scene tends to look like this: 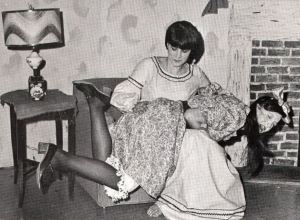 Sergel describes Tootie as having ‘a slightly macabre sense of humor’. She also has a fixation about biting people on the legs. ‘Sometimes you go too far, Tootie,’ her grandfather tells her. ‘You’re all right until you go too far.’

How far is too far? During the first act, Tootie is prevented from playing a prank that involves passing off a dummy as a hit-and-run victim, but towards the end of the same act she tries it again with the ‘body’ in the path of an oncoming trolley-bus – which gets derailed as a result. And for Mr Smith, that settles it: no more argument, the family is definitely moving east. ‘The children just run wild here,’ he says. ‘Maybe in a more civilized place like New York, they’ll settle down.’

You might expect more immediate consequences for Tootie that will stop her settling, or at least sitting, down for a while; but in fact, when we next see Tootie later the same day, she is seated and obviously unspanked. On the other hand, the derailing incident could have repercussions that might make Mr Dodge, Smith’s boss, change his mind and not send him to New York after all: ‘if a man can’t manage his own family, he can’t manage anything’. For his other daughters, that would be good news, but not unequivocally so for Tootie: if the New York job falls through, her father warns her, ‘I’ll paddle you so hard it will more than make up for all the times I’ve missed’.

Tootie is unabashed by the prospect. What matters is that she has discovered the way to forestall the move east. All she needs to do is make things worse with the boss. She considers burning Mr Dodge’s house down, but fate saves her from embarking on a career of criminal arson when Dodge learns of the family’s strong reaction against the New York posting and comes round to talk it over with Mr Smith. All the daughters turn themselves into a practical illustration of how poorly their father manages his family, but the most outrageous action comes from Tootie: in one of the play’s comic highlights, she elaborately tries to creep up on Mr Dodge and bite his leg, and after several frustrated attempts, eventually succeeds. 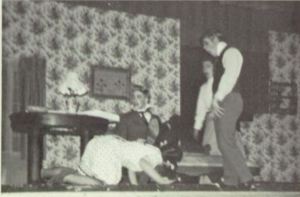 The outcome is that her mother ‘jerks her up, pulls her to right center and spanks her several times hard’. She ‘wails sharply and loudly’ as she is spanked. 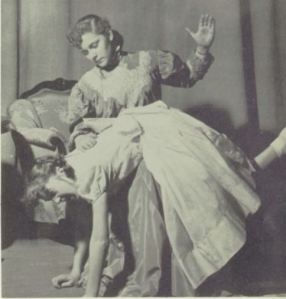 And because of all that, Mr Smith is not going to New York. He’s not even going to work on Monday. Dodge fires him.

Don’t worry, in the third act, a week and a half later, Dodge realizes the St Louis branch can’t function without him: he’s taken back at an increased salary, he doesn’t have to relocate to New York, and the family gets to see the World’s Fair. A happy ending for all who deserve it…

You’ll have noticed that Tootie is threatened with an ultra-hard spanking by her father, but when the time comes, it’s her mother who spanks her. That’s fitting, because part of the point is for Dodge to witness a scene of domestic anarchy which Mr Smith is unable to control, thereby motivating the firing. So it’s important that, at this particular moment, he shouldn’t be the one seen to impose the final sanction on his ankle-nipping daughter. But it’s interesting that several high school productions through the years appear to have demurred.

Here’s part of the cast group photograph for the senior play at Wheeling High School, West Virginia, on April 1, 1955, with Tom Grundy as Mr Smith and Carol Niedermeyer as Tootie:

That wouldn’t be the only time a group of high school students staged a photograph showing something they felt should have happened in a play, but didn’t. (See here for another example.) And they weren’t the only ones who seem to have believed that spanking is more the father’s prerogative than the mother’s. Nearly twenty years later, here’s a picture from the 1973 fall play at Harrisburg High School, Illinois, with Phil Edwards spanking Pam Estes: 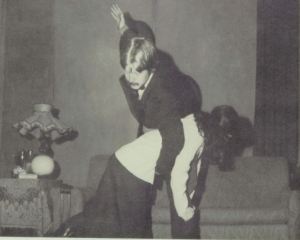 And that seems to be the business they actually used in the play, despite what the script says!