‘Homework’ is a long-running project of the Galerie La Femme in Prague, whereby, every year, working Czech artists are assigned a topic for pictures to be included in an upcoming exhibition. Nobody gets spanked for not doing their homework, but conversely, the homework occasionally involves spanking…

The 2014 exhibition was to be a tribute to the great Czech novelist Bohumil Hrabal, whose centenary was celebrated that year. He was the author of the novels later adapted for the screen as Closely Watched Trains and Postriziny, and three of the contributing artists found inspiration in the iconic spanking scenes.

In Closely Watched Trains, you’ll remember, the spanking is done by the unusual method of marking the girl’s bare bottom with an ink-stamp. Jiri Tylecek (born 1948), who now lives and works in France, and paints under the name Tylek, presented a painting showing the outcome:

Josef Mzyk (born 1944) chose to depict the scene itself:

For reference, he used a photo of the scene from the 2006 Prague production with Lucie Pernetova:

The quirkiest contributions came from Rudolf Brancovsky (born 1980), who creates his distinctive work not only with paint but also more unconventional materials such as sculpted cardboard. Here’s his take on the Trains spanking:

He also handled Postriziny,  describing it as a tribute not only to Hrabal but also Magda Vasaryova, in gratitude for everything she did in the 1980 movie, and especially for being spanked:

If you wanted to buy the Postriziny picture, it would set you back 29,000 koruna, but you can get it on a T-shirt for a much more modest sum. 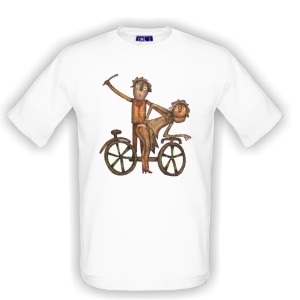