Dr Kenneth B. Ford, a research scientist, once gave his girlfriend Gertie Kettering an inscribed garter.

Later she became his ex-girlfriend, and is now about to marry Ted Dalton, and she plans to wear the garter at the wedding. But a situation has arisen which makes it imperative for Dr Ford to retrieve the garter, or else he will become embroiled in scandal.

That’s the plot of the farce Getting Gertie’s Garter, which began life as a 1921 stage play by Wilson Collinson and Avery Hopwood, became a silent movie in 1927 and was then remade in sound eighteen years later in 1945, with Marie McDonald as Gertie and Barry Sullivan as Ted. One thing added for this version was a moment when Ted decides to teach Gertie ‘not to play tricks on your old man’. 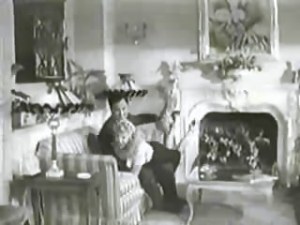 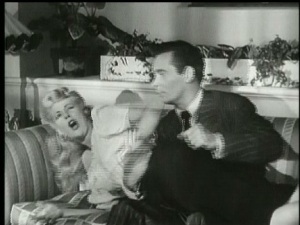 This was too good an opportunity for the stills photographer to miss.

Sadly, however, it’s an opportunity that Ted manages to miss. With hand upraised, he makes her promise, ‘no more gags’, and say she’s sorry.

And with that, the scene turns from good-natured horseplay into a cuddle.

A lucky escape for Gertie, then? On the whole, yes, especially since the scriptwriters for the 1946 radio abridgement, with Barry Sullivan reprising his role and Lucille Ball taking over as Gertie, decided the scene wasn’t necessary to the plot: it was one of many things in the movie that were sacrificed to get the story into a half-hour slot.

But there was one little cloud in Gertie’s clear sky. That pesky stills photographer! When the movie was released in November, his picture of her predicament was to be seen in lobby displays across America, sometimes inventive ones like this:

(Look closely at the knee and you’ll see Gertie across Ted’s!)

A passing embarrassment, perhaps. But we have previously seen how that fine photograph went on to inspire more than a few pieces of new artwork decades later, with Gertie now in bigger trouble. 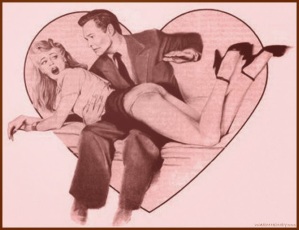 We saw, too, how Gertie’s spanking came to feature on a French designer fan created by the firm En Cas de Chaleur. Here’s a preliminary sketch for another one, using the same image, but with Gertie’s troubles magnified still further. 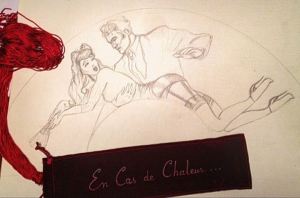 She faced a different problem at the hands of Michael Zug, a graphic artist from Brookeville, Maryland, whose work often draws on pop culture from the last century…

… but often gives it a spin towards the bizarre or grotesque. His version of Gertie’s spanking, for instance, was part of a series themed around ‘Death and the Maiden’:

But my favorite retake on the 1945 image is also a retake on one of those retakes: Gertie’s granddaughter, so to speak.

It’s a cute, romantic reimagining of the image, with great detailing on the girl’s panties too. I’m only sorry I can’t tell you the full name of ‘VZ’, the artist responsible.

Postscript (September 2021): I can now! She’s Aubrie Van Zandt from Denver, Colorado, and if you are interested in her splendid work, please pay a visit to her website.