Young ladies hoping for expensive Christmas presents might want to take a leaf out of Eartha Kitt’s book. In 1953, she recorded a steamy song consisting largely of a wish-list so extravagant that many a girl would have wound up on the naughty list just for asking. But Eartha got away with it, and had a hit on her hands. 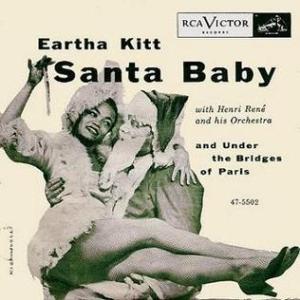 ‘Santa Baby’ has gone on to become a Christmas evergreen, with cover versions by, among many others, Madonna, Kylie Minogue, Ariana Grande, Gwen Stefani… and, in 2017, the Australian singer Bruno.

Bruno works extensively in Athens, and it was there that she recorded the song (go here to listen to it), and shot the accompanying promo material with the German-Cypriot photographer Alexander Karmios. The plan was for her to sit on Santa’s lap, but then they had a better idea, so unlike Eartha, she did find herself on the naughty list:

She also got to dance with Santa, and got her bottom smacked while doing so: go here to see it.

Here’s hoping she too had a hit on her hands – and not just on the seat of her panties!