‘She needs a lesson, that young lady does, and this time she’s going to get one!’ The arrogant Margot has offended her fiancé Tom once too often, and the prospects look fair for us: ‘I’ll tan her behind, that’s what I’ll do. I’ll put her across my knee and…’

But Tom is talked out of it: ‘I won’t demean myself or Margot by applying the good right hand where it ought to be applied,’ he says. But it is also said that ‘walloping a woman’s behind is only fair, proper and righteous; it’s what she ought to expect’, so Margot doesn’t stay lucky forever, and when she throws a glass at Tom… We hear about what happens next in the words of a witness:

‘He sat in a chair; he held her face down across his knee; and he… he…’

‘Steady! I can imagine.’

‘It wasn’t as embarrassing as it might have been, even if he did lift up her skirts at the back. Under their skirts, you see, they wear a thing like a pair of white trousers with lace and frills on it.’

But it was a long way into human history before feminine modesty had this protection. When a spanker from earlier times decided to dispense with the encumbrance of upper garments…

It’s a moment (well, actually considerably longer than a moment) from the 1973 Italian sex comedy Elena, Si… ma di Troia (Helen, Yes… but of Troy), in which the Etruscan vagabond Ottone (Don Backy) gets embroiled in the outbreak of the Trojan War, including administering the above bare-bottom spanking, at great length, to a wench at the court of King Menelaus. (It’s also supposed to be a very hard spanking, but the actress can thank the Foley artist as well as her lucky stars.)

Fast-forward to the Middle Ages, and Maid Marian has much the same luck with Robin Hood, at least when they are played by Ralph Jenkins and Dee Lockwood in the witless German-American co-production The Ribald Tales of Robin Hood (1969). 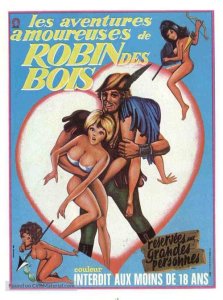 Marian has misappropriated some of the money Robin has been collecting to fund King Richard’s return. Her reward: 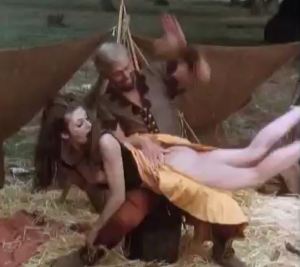 It’s a scene of woeful dialog, terrible acting and rather obvious Foley work, but the OTK positioning is good and, for those who like that sort of thing, the Foley hasn’t spared Dee’s (nether) blushes.

Onward to what we might call Tudor times, if we weren’t bound for the court of the French King Charles IX (and ‘Valois times’ doesn’t have quite the same ring to it). Well, actually we’re bound for the 2010 French biopic about his successor once removed, Henry IV. In a bid to end the French Wars of Religion, the Queen Mother, Catherine de Medici, proposes a marriage between Henry and her daughter, Margot (Armelle Deutsch). Margot is unwilling, so Queen Catherine puts Margot’s brother, King Charles (Ulrich Noethen), on the case:

And so it continued into the age of Casanova, the hero of uncountable tales of sexual adventure, among them Rosamond Marshall’s novel Rogue Cavalier (1955).

The narrator, who is Casanova’s illegitimate son but doesn’t know it, meets up with his father in Paris and strikes up a friendship. One visit is especially memorable:

Calling on my friend Casanova early one morning, I heard screams coming from his bedroom. When I knocked at his door, he said, ‘Come in.’ I found him with his Chérie turned across his knees, her pretty buttocks bare and his palm descending upon them with force and rhythm..

The castigation completed and the girl having run sobbing from the room, Casanova wrung his stinging hand and said, ‘That innocent, that guileless creature, filched my wallet containing fifteen thousand and some odd francs while I slept and she won’t tell me where she hid it. I have promised her three spankings per diem until she confesses and returns the loot.’

Whatever pretension to period authenticity all these various films and stories may or may not have, they all add spice by capitalizing on a well known fact of clothing history: once the skirt is raised, all these spankings are bound to be given on the girl’s bare bottom. It wasn’t until the nineteenth century when young women got a little coverage for their spanked portions, or, looked at another way, something different to blush about.

In cinematic terms, this takes us to the Old West, or at least to the generic, romanticized version of it to be found in spaghetti Westerns. American Westerns too, of course, but you’ll have noticed that it tends to be in the European cinema that we find a more relaxed approach to the particular subject we’re exploring here.

The most immediately relevant serving of spaghetti is part of a short-lived movie franchise built around the boisterous MacGregor family, which started with 7 Pistoles per i MacGregor (Seven Guns for the MacGregors; 1966). The title sounds like a conscious escalation of Dos Pistolas Gemelas from a few months earlier, though it may be just a coincidence, as there’s no other connection between the two films beyond a few overlaps in cast and crew. No, they don’t even both have spanking scenes… for that, we have to wait for the second entry in the MacGregor series, 7 Donne per il MacGregor (Seven Women for the MacGregors; 1967), a title that sounds like a play on Seven Brides for Seven Brothers, though the movie itself is, if anything, an inversion of Seven Brides, with the objective being rescue rather than abduction.

Here are four of the seven women:

Despite what you see there, they are wearing suitable period bloomers in the relevant sequence early in the film.

It’s a betrothal party which degenerates into a Scots versus Irish brawl between the numerous MacGregor brothers and the equally numerous Donovan sisters.

In the course of it, one Donovan girl has her skirt torn off, while another suffers an even more embarrassing fate at the hands of David MacGregor (Hugo Blanco): 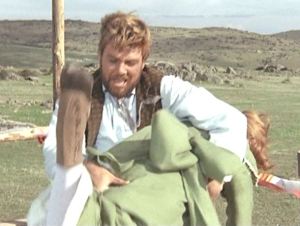 So the coming of bloomers made it possible for a girl’s skirt to be raised for spanking without trespassing into the bodily exposure that marks out the overtly sexual, whether in various forms of erotica like the examples involving Troy, Robin Hood and Casanova, or the slightly more highbrow appeal of Henry IV. The emergence of broader credentials is reflected in the fact that the spanking scene was selected for inclusion in the trailer for the MacGregors film – one of only a very few raised-skirt spankings in mainstream movies to get such prominent emphasis. The trailer, incidentally, used a different, and longer, take: 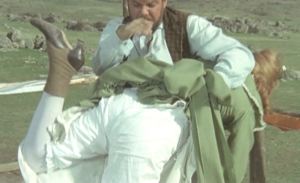 Later in the nineteenth century, and earlier in the twentieth, we go to Madrid for the neorealist Spanish movie El Crimen en la Calle de Bordadores (The Crime in Bordadores Street; 1946). This features a catfight between Rosario (Julia Pachelo) and lottery ticket seller Lola (Mary Delgado), which ends with Lola as the loser:

Forward again to 1916, and to 1972, the year of the French movie Le Bar de la Fourche, starring the popular singer Jacques Brel as Vincent van Horst, who goes to Canada in search of his lost love and, when she refuses to see him, takes up on the rebound with a younger woman, Annie Smith (Isabelle Huppert).

The relationship with Annie also has its hazards, not least among which is her attempt to fend him off with a shotgun. He disarms her, then lays her flat on the table and… 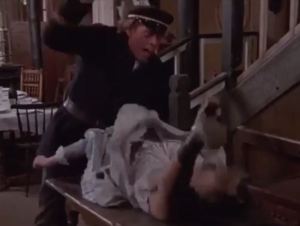 And this was another one that made it into the trailer.

The year 1916, the midpoint of the First World War, marks several historical turning-points. In the movies, the spanking of adult and older teenage women went from being an occasional comic diversion to a relatively frequent event: from the beginning of the century up to 1916, there are six known scenes (in A Warm Occasion, Mabel’s Dramatic Career, The Horse Wrangler, Almost Married, Mabel’s Wilful Way and The Pawn of Fate), whereas there are another six in 1917 and 1918 alone (in Rebecca of Sunnybrook Farm, Neptune’s Naughty Daughter, Jerry’s Running Fight, A One-Night Stand, Moonshine and Riddle Gawne) – though it wasn’t until the following decade that the trickle turned into a torrent. In life, meanwhile, women were starting to do war work, which sometimes entailed wearing overalls, which in turn had an impact on what they wore underneath and kick-started the progressive abbreviation of intimate apparel that ultimately led to the modern thong.

And that meant that mainstream movie spankings tended to be less likely to feature raised skirts when the period setting was later than around 1916: they ran into similar issues of bodily exposure that restrained them when dealing with pre-Victorian times. (Of course, there are always exceptions…) But the same developments in underwear style also presented filmmakers with a practical difficulty that we’ll examine in detail next time.