Shortly after he took over as Doctor Who in 1987, Sylvester McCoy told an interviewer how, in the mid-1960s, he decided to become an actor after seeing a John Wayne film: none other than McLintock! The scene that made up his mind was this one:

If being an actor meant getting to do that, Sylvester McCoy wanted to be an actor!

So clearly he projected himself onto John Wayne, but the interesting thing is the Freudian slip in the way he told the story: it was, he said, a scene in which Wayne spanked Kate O’Mara. 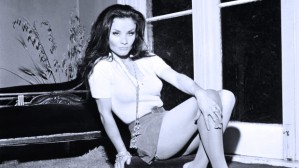 John Wayne never worked with Kate O’Mara, who was 23 when McLintock! was made (whereas Maureen O’Hara was 42), but Sylvester McCoy had worked with her very recently at the time he gave the interview: she was the villain in his first Doctor Who story. 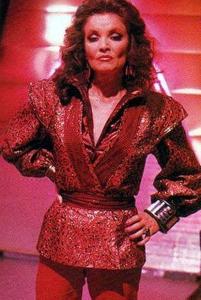 She had been playing ‘dangerous’, sexy women for decades, often coming close to being spanked but never quite getting there. In a 1967 episode of The Saint, she plays a temperamental Italian racing driver who makes the mistake of trying to slap Simon Templar.

She really belted him; Roger Moore later found out that she’d just had a fight with her boyfriend and needed someone to take it out on. The force of the blow sends her bracelet flying off her wrist, leading to her second mistake: bending over to retrieve it. 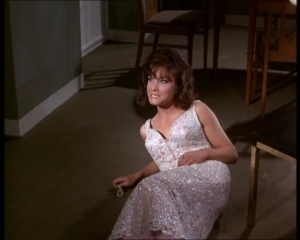 She got similar treatment when she played a wild gipsy girl in the 1977 series of The Two Ronnies. Ronnie Barker’s character, the comically inept detective Piggy Malone, comes into a barn and sees something suspicious rustling about underneath a pile of hay, so he picks up a piece of wood and administers an almighty whack… which turns out not to have landed on the head of a would-be assailant, as he thinks, but on the other end of Lucy Lee. 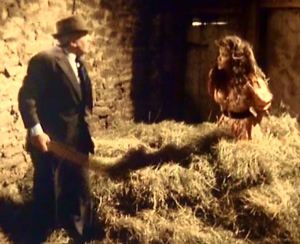 She rubs her rear ruefully, then tells him she has information and invites him to sit down in the hay.

Piggy thinks she’s being forward, but she explains that the hay is ‘the only place I can sit down at the moment’. It’s a clear spanking reference, only without the actual OTK.

But there is some reason to think that Kate was spanked in her private life. She doesn’t mention it in her 2003 autobiography, Vamp Until Ready, but a newspaper interview she gave in the mid-1970s covered the subject of her limitations and shortcomings as a lover:

‘I’m every man’s dream of what a sexy woman should be. I look like the tempestuous heroine they read about in books, all marvellous thighs and acres of hair flowing around. They take one look and think, ‘That’s the woman I’ve always wanted.’ After a couple of days with me they think, ‘God, no it isn’t!’ but they always have hopes that if they turn me upside down and spank me, it’ll be alright in the end. Only it never is.’

So it certainly sounds as if somebody put her across his knee at some point, even if (as is often the way with non-consensual spankings in real life) he then swiftly became her ex-lover.

For an actress like this, there is one role that she’s surely born, or even destined to play, and Kate did indeed play Kate in The Taming of the Shrew several times over. But another, associated role, and all that it entailed, took its time coming to her: it was not until 1991 that kismet finally struck, and Miss O’Mara found herself cast as Lilli Vanessi in Kiss Me Kate, and finally got similar treatment to the similarly named Miss O’Hara: the spanking that so many had been thinking about for so long…