We continue our survey of Kiss Me Kate in 2013 in Mt Gretna, Pennsylvania, where the Gretna Theatre staged it for the fortnight of July 11 through 21. The publicity might not seem to be anything out of the ordinary: 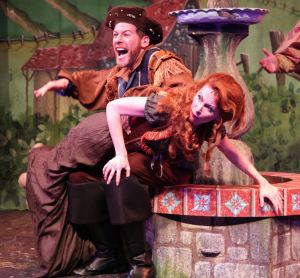 The local paper’s reviewer did the usual job of trying to have it both ways:

The paddling is, of course, a sexist maneuver that likely would not be attempted in a contemporary play, but was not completely out of line in the culture of the 1940s and probably unremarkable in Shakespeare’s day. Gender politics aside, it’s a very funny scene.

But the production also threw up something you don’t see every day: a memento sculpture showing how Kiss Me Kate would look if performed by flamingoes!

In South Korea on July 26, at Camp Humphreys Community Theater: 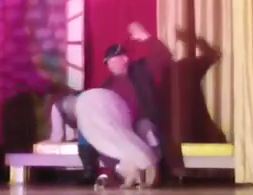 And in Illinios, Schaumburg Summer Theatre chose KMK as the production to celebrate its 25th anniversary, and ran it from July 26 through August 4:

Also in July, at the Malt House Theatre, Burlington, Wisconsin, Rob King has a little something for Jenny Risteen-Hoffman: 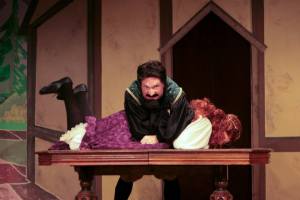 Here are the after-effects:

In England, at the Keswick Amateur Operatic Society:

And here’s an unidentified one from the second half of July:

Straddling July and August was this production by the Pierre Players of South Dakota, with Daniel Palmer and Jennifer Peacock:

August 1 through 4 were the dates for a production at Tulane Summer Lyric Theatre, Louisiana, that was described as ‘sizzling’. One particular part of lead actress Katie Howe may well have been sizzling thanks to the efforts of her costar Colby McCurdy, hence her reaction to being deprived of a very necessary aid to sitting: 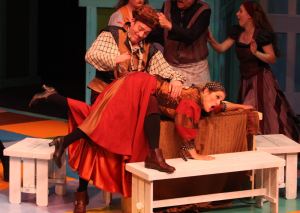 For more about this production, and in particular the measures taken to ensure the sound of the spanking would make its full impact, see here.

In Germany, KMK was to be seen August 11-25 at the Coburger Sommeroperetta, with Dirk Mestmscher using his belt on Lenneke Willemsen:

This was a raised-skirt spanking, and Lenneke’s Lilli had not availed herself of bloomers, though how far it went seems to have varied from performance to performance. Above, the spanking is on her black petticoat, whereas below… 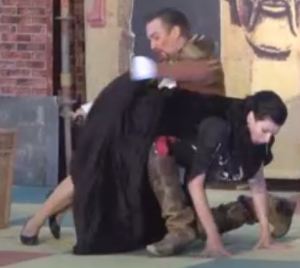 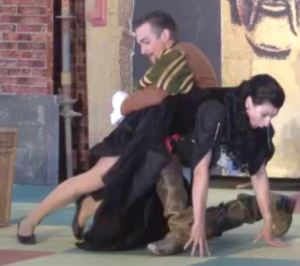 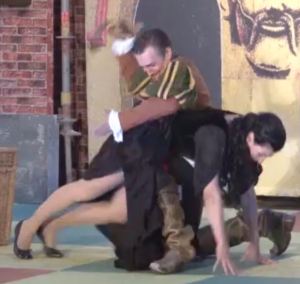 Which really makes you wonder if it ever went all the way! 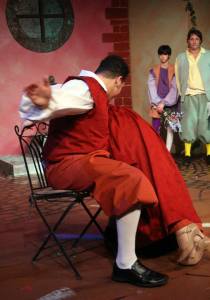 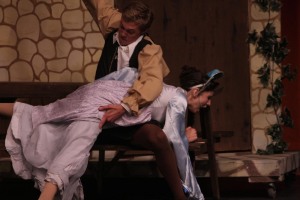 Also in August, we have no spanking picture from the production by the Commonwealth Shakespeare Company, Boston,

but the production is notable because the actors were under-rehearsed and at some points were still on book – in other words, were carrying their scripts onstage. Marc Kudisch (Fred) made inventive use of the situation, and the book, in the spanking scene – and used it to spank Lilli (Kerry O’Malley)!

Opening in September and running until October 12 was the production at the Artisan Center Theater, Hurst, Texas. For the long run, the company engaged a double cast: Noel Allen spanked Elizabeth Dewhirst in some performances, and Kyle Holt did the same to Kristina Bain in others. It was Kyle and Kristina who got to pose for the photographer:

In California, KMK was the offering at Cabrillo Music Theatre October 18 through 28, with Broadway star Davis Gaines as Fred, a role he had previously played in a concert version at Florida State University in 2009. Here he is with his Cabrillo Lilli, Victoria Strong, posing for a publicity picture: 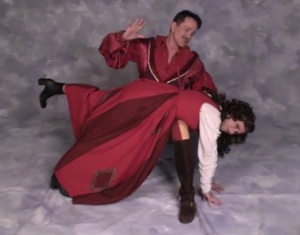 Despite the publicity, the show played to half-empty houses for its nine performances; one reviewer said that anyone who didn’t go ‘should be bent over Petruchio’s knee and soundly spanked’. As it was, that fate only befell Victoria Strong: 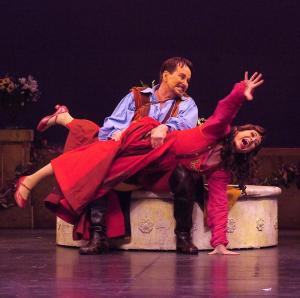 In West Virginia, on October 23:

At a high school in Wisconsin, November 15 through 17: 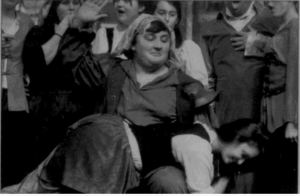 Also opening in November, and running through to May 17 the following year, was a production in Lucerne, Switzerland. Here are the results of Fred Graham’s handiwork:

And we mustn’t leave 2013 without noting two productions whose dates are unknown and details incomplete. In Hanover, probably the one in Germany: 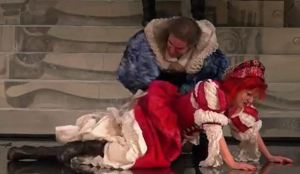 And this one is identified as being from Notre Dame, probably one of the many high schools of that name rather than the university: 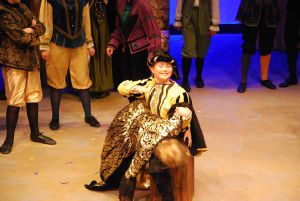 To round off the year, we leave not only the theater but the performing media altogether. 2013 saw the publication of Broadway Musicals Through the Years, a collection of watercolor paintings by the Pennsylvania artist John M. Savidge. To represent KMK, he chose this scene: 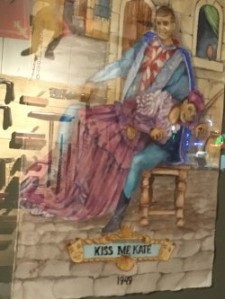