The world slowly began to reopen in 2021, but would Kiss Me Kate ever get back to normal? Indeed, what is normal nowadays for KMK?

It was another less than wonderful year for the musical. Planned productions were still being canceled well into the summer, though a few made it to the stage with a masked cast and socially distanced audiences. At least one production, in Australia, appears to have censored the spanking scene: the director declared his intention ‘to take away some of the bad male behavior’ and punish Petruchio for his ‘macho swaggering’, drawing inspiration from the shamefully sanitized 2019 Broadway revival. And, as now appears to be usual, most others prissily avoided offering any representation of spanking in their publicity material or production photographs: what can still (sometimes) be done onstage cannot now be shown online. All of which is a good reason to give thanks to the Bulgarians…

May 28 saw the reopening of the production at Burgas Opera, which had first appeared in 2019. This time round, Marcho Apostolov was still Fred, but Shmilena Sultanova had taken over as Lilli:

And despite appearances there, he didn’t forget the necessary clothing adjustment:

Opening on July 15 was the production at the Croatian National Theater, with the two leading roles split: the Fred part, renamed Bruno Cambieri in this vernacular version, was shared between Mirko Soldano and Dario Dugandžić, and Leonora Surian Popov and Zrinka Kušević were alternate Lillis (and their character wasn’t renamed). I can’t say I’m altogether sure that Lilli is being spanked in this production photo: 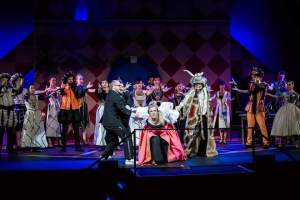 (It might alternatively be the wedding scene.) But what I can say for certain is that the Lilli who’s bending over there is Zrinka.

At the other end of Europe, in England, Titchfield Festival Theatre produced the musical September 8-18, with Alex Hillman as Fred and Lauren Kempton as Lilli. Here she is over the table:

Do you think she can sit down afterwards?

And if you want empirical proof… 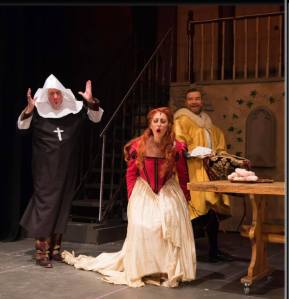 And that was it for 2021. A few positives to accentuate, but it’s sad to say that, for a lot of narrow-minded people, the spanking in Kiss Me Kate is currently considered, at best:

So it’s thanks again to the Bulgarians for a witty articulation of a depressing state of affairs.