In April 2022, the Filmmakers Company, based in Austria, released a trailer for what they described as a new experimental film, Der Krampus und die wilden Weiber (translation above). It was said to be an 80-minute movie, directed by Peter Citti and shot in three days, April 1 through 3 – which would mean they shot more than 25 minutes’ worth of final-cut footage every day! That slightly incredulous exclamation mark is because commercial films used to operate on the basis of one or two minutes per day, though I guess advancing technology may have made miracles more achievable. And anyway, these are the same people who produced Hot Spanking Rod, another Krampus movie which made what we shall politely call inventively economical use of footage, so it’s not impossible that heavy recycling enabled them to squeeze 80 minutes of screen time out of markedly less content.

You’ll gather that I haven’t seen the film itself, and so can’t really say anything for definite. There was talk of (and may actually have been) a private screening for friends and investors at the Cannes Film Festival in May, and then nothing more was heard of it up to the time of writing.

What I can tell you is that the early publicity mentioned the names of three girls who appear in the film: Sanja Domainko, Nikoletta Popadiyna and Sofia Dorosh, shown here in that order: 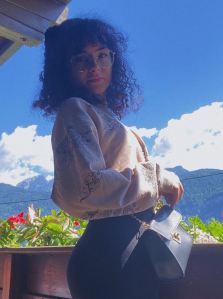 As a bonus, I can also show you another angle on Nikoletta:

And, not at all as a bonus but rather the main event, I can show you two of the girls meeting the Krampus. Let’s start with Nikoletta: 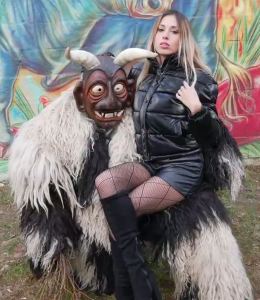 He’s not an entirely docile Krampus…

… as Nikoletta discovers to her cost: 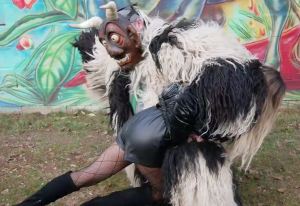 She reveals what precautions she has taken, or rather hasn’t…

…. and maybe regrets her lack of foresight.

That means Sanja can go home unspanked for now, though let’s hope she had an interesting role in the movie itself.

All that remains is to direct you to where you can see the trailer, here, and hope the finished film is worth waiting for! If it is, it may well get some more coverage here…