The Young People’s Theater Group of Gary, Indiana, was established in 1950 by DeWayne Woodring (1931-2020), a leading light of the local YMCA and a future Methodist minister. He had just graduated from high school, where he had been active in school theater, and he established the YPTG in association with the City Methodist Church, which had its own theater on the premises. 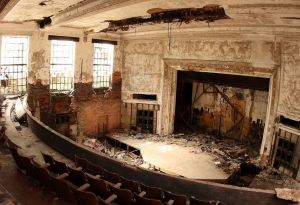 Woodring’s aim was to give some creative outlet to the community’s young people (including, one suspects, himself) during the summer months when school was out. The group followed the model of the Indianapolis Teen Drama Guild, founded the year before (and responsible for This is the Life, a play with a spanking scene, in 1952): participants took total responsibility for every aspect of the show to be mounted, backstage as well as onstage, including scenery, costumes and make-up. By September, they had a show to open in downtown Gary.

The project was a roaring success, and Woodring stayed with the group, directing the plays, until eventually his ecclesiastical career took him out of state. By 1955, it was such a popular summer activity that they could no longer guarantee, as in previous years, an acting part for everyone who wanted one. There was also pressure to enable elementary school children to participate, and this was a factor in the decision to mount a show that would offer seven roles for seven little ones: Snow White and the Seven Dwarfs.

That didn’t entirely solve the popularity problem, because Snow White is a story that can be efficiently dramatized with just eleven characters: as well as the dwarfs, there has to be a beautiful heroine, a wicked queen, a principled huntsman and a handsome prince. But the requests for roles just kept on coming in, and the number had reached 57 when director Woodring reluctantly took the decision to close the door: anyone else wanting to be involved would have to work entirely backstage.

But this still left the production needing to find more than forty additional characters to accommodate everyone. So they devised a version of the story that included a lot of extra business, such as a sequence in which Snow White, abandoned sleeping in the forest, was menaced by three ghouls and saved by three angels. Numerical matching seems to have been an important dimension, for it was also decided to develop the court context for the early part of the story by giving Snow White seven maids of honor to match the seven dwarfs later on. The most demanding of these seven new parts was given to Janet Pence, whose maid of honor was naughty enough to merit severe handling by the Court Chamberlain, played by Dale Whitt: 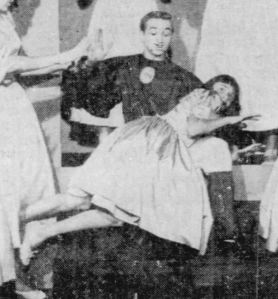 She had to endure it in four performances, including a matinee, between September 15 and 17.

In contrast, the main requirement for the other six maids seems to have been to look horrified at the fate befalling their unfortunate colleague.

And that’s a scene that has probably never appeared in any other version of Snow White, before or since!