Meet Edith, the eponymous heroine of The Lonely Doll (1957) and its nine sequels (1958-81), beloved of a past generation of children and now considered by many modern parents to be one of the most disturbing of all children’s books.

I guess a lot of that sense of creepiness comes from Edith’s slightly sinister face, with its wide-set eyes and pinched mouth. But a lot of it also comes from the fact that Edith often gets spanked. And that’s something that, in the context of this site, either needs to be sedulously ignored or studiously thought about.

I think of the Lonely Doll books as fundamentally a variant of the ‘secret life of toys’ trope, best known nowadays from Toy Story. Edith lives by herself until two teddy bears come into her life and the three of them set up home together and have some gentle adventures. 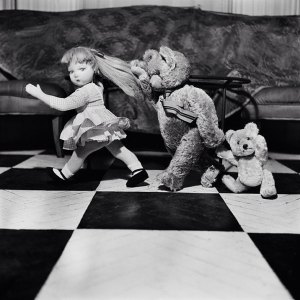 And in the course of those adventures it is sometimes necessary for the senior bear to take stern measures. 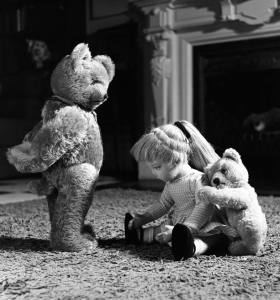 Both the popularity and the problem lie in the fact that this separate Edith world reflects or refracts aspects of our own: otherwise there’d be nothing for the books’ young readers to relate to, even though it’s a world rooted in and speaking to the attitudes and experiences of the children of 1957, which includes some things, such as spanking, that were once normal but are now widely considered to be wrong. But that’s not the whole story.

The books and their photographic illustrations were the work of Dare Wright (1914-2001), a striking Canadian who grew up in Cleveland, Ohio. Edith was originally one of her childhood playthings in the 1920s. 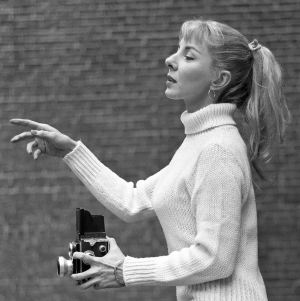 As well as a photographer and author, she was a fashion model and actress with a haunting, slightly stand-offish beauty.

And you may have noticed a certain similarity between her and Edith, including the doll’s blonde ponytailed hair and, yes, those hoop earrings. Here they are together in 1957, the year the first book came out.

And that puts a new twist on scenes like this:

Modern adult readers aren’t recoiling only from the way the books treat as normal a child discipline practice that is now outmoded, making them a cultural Trojan Horse from what we smugly think of as a less civilized past. They may also be picking up on a latent psychosexual dimension based on the implied identification between Dare Wright and her creation. 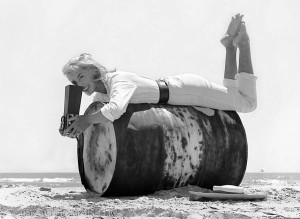 It’s true that there is something strange about these books, but it takes a big leap of reasoning to infer that their intermittent preoccupation with spanking reflects a possibly unconscious desire in Dare Wright herself, even if it weren’t a leap into an area that isn’t really any of our business. Some argue that it’s purely and simply a reflection of childhood as it then was, when most girls were spanked from time to time and spanked their dolls in turn, and when, very occasionally, the dolls came to life in stories and spanked them back:

And there must be a grain of truth in that view, since the first Lonely Doll spanking scene was originally inspired, at least in part, by a photo session Dare and Edith did in 1955 with a young friend, which included this impromptu moment:

But if that’s all there is to it, what are we to make of the way the subject of spanking keeps on coming up? (There are scenes in three of the ten books.) 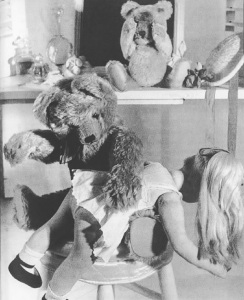 In more recent times, a number of photographers have brought out this curious quality in their attempts to recreate the Lonely Doll spankings using models.

Well, yes, but also with this kind of model:

Here’s their take on the spanking scene:

And here’s a stunning alternative interpretation:

And for those modern adult readers who stress (and, boy, do they stress!) about how Edith is always showing her panties… 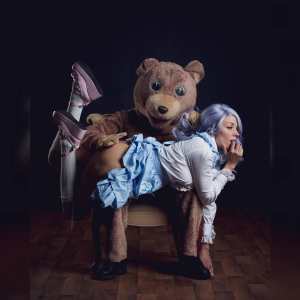 I have to say that I’d much rather see a picture in which the one being spanked was Dare Wright herself and not her plastic alter ego. But these modern versions are surely the next best thing!