Last time we saw how spanking scenes, so widespread in the mainstream English-speaking media until the early 1960s, then gradually disappeared, rendered first old-fashioned, then incomprehensible, by changes in social attitudes and behavior. Now let’s look at another example from what may be the last mainstream cinema spanking to be produced in Denmark, in the girls-in-the-army comedy Piger i Trøjen 2 (1976).

The story revolves around Hermann Clausen (Klaus Pagh), a Danish diplomat who spends the week in Brussels and then comes home to spend the weekend in domestic bliss with his ‘little pussycat’ of a wife, Merete (Berrit Kvorning). He’s a firm believer that a woman’s place is in the home, but in reality she has secretly got herself a weekday career, as a first lieutenant in the Danish army, in charge of a trainee unit of young women, the ‘piger i trøjen’ of the title.

She usually gets home shortly before Hermann, giving herself just enough time to beautify herself and change into some suitably clingy dress for his attentions.

On the occasion in question, he first compliments her, then gives her a little something to worry about.

HERMANN: Lovely wrapper! What’s the price tag?
MERETE: I won’t shock you:
HERMANN: How can I afford this?
MERETE: You can’t.
HERMANN: Soon you’ll have to go out to work.

HERMANN: You’re going to get a spanking.
MERETE: Yes, please.

And there follows a chase around the living room, culminating in:

The humor of the scene lies in the fact that Merete has been followed home by her colleague, the comic drill sergeant Valby, and he is looking in through the window. With an extra layer of irony, at least for us connoisseurs, he’s played by Danish comedy favorite Dirch Passer, who had administered some magnificent screen spankings in his time, 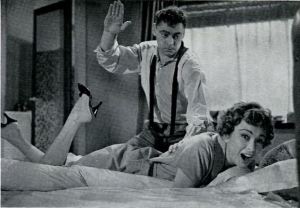 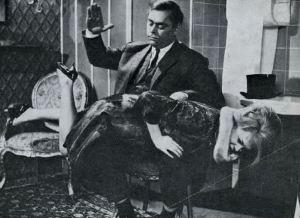 but is now reduced to a state of startled, involuntary voyeurism.

But there is a fundamental difference between those earlier spanking scenes and this one, and it is encapsulated in those two little words that Merete says when threatened with a spanking: ‘Ja, tak’ (Yes, please).

In contrast, the customary response in this situation is more like this:

Occasionally this does actually work. In the 1947 romantic comedy, The Bachelor and the Bobby-Soxer, Shirley Temple plays 17-year-old Susan Turner, who becomes infatuated with the other title character, Richard Nugent (Cary Grant). She quarrels with her sister Margaret (Myrna Loy) over him, until their uncle, psychiatrist Matt Beemish (Ray Collins) intervenes. He’s trying to persuade Margaret to get married, because ‘there’s nothing wrong with Susan that the firm hand of a man in the house wouldn’t cure’. In line with this sound medical opinion, he Dutch-uncles his other niece:

BEEMISH: Susan, I’m still strong enough to take you over my knee and give you the spanking I sincerely believe you deserve.
SUSAN: You wouldn’t dare!

BEEMISH: I have no intention, however, of spanking you if you’ll be sensible.

So that’s the third film in a row to feature a narrow escape for a Shirley Temple character, after Kiss and Tell (1945), where the spanking is confined to the publicity photos, and Honeymoon (1947), with its unfulfilled spanking threat (and possible deleted scene). And that, of course, is a great pity. 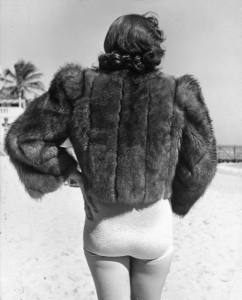 More often, however, ‘You wouldn’t dare!’ is a challenge doomed to failure: 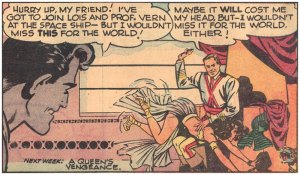 There is an alternative and arguably even riskier response, which we can illustrate from one of the best spanking scenes of the 1940s. It comes in Ed Dodd’s newspaper strip Mark Trail, about the adventures of an eco-friendly photojournalist. In the story in question, from the fall of 1949, Mark’s environmentalist girlfriend Cherry Davis is cultivating millionaire Remington Calhoun in the hope of getting a $25,000 donation to her Lost Forest wildlife conservation project. The complication is Calhoun’s spoiled daughter Toni, who is rarely seen without a cigarette in her mouth, and who first meets Mark when he mistakes her for Cherry and sneaks up behind her to steal a kiss.

This makes him, in her eyes, a coveted prize for the winning:

At first, Cherry underestimates how seriously Toni takes the rivalry, and asks Mark to keep her entertained so that her father will remain well disposed to the project. But when Mark goes off on a dangerous trip to photograph moose in the wild, Toni insists on joining him, and then disregards his instructions to keep her distance.

The upshot is that she disturbs the majestic moose and creates a perilous situation.

Once Toni is rescued and the moose has calmed down, the danger is not past so much as reduced to a particular area of Toni’s anatomy: 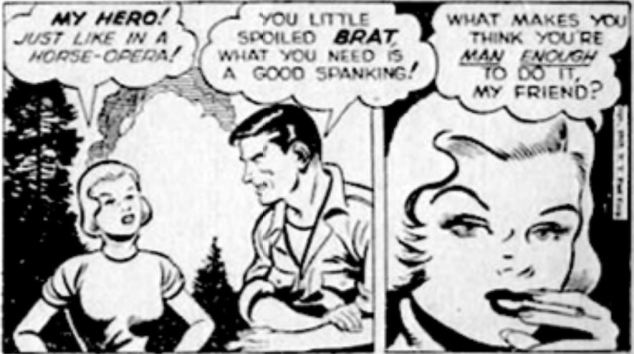 And here comes the risk…

What’s complex about this is that ‘Go ahead, spank me’ doesn’t literally mean what it says. We’re familiar with the problematic and confusing notion, now comprehensively discredited, that when a woman says ‘No’, she really means ‘Yes’. (Should you be in any doubt: no, she doesn’t.) But what Toni says to Mark is a ‘Yes’ that really means ‘No’: it’s a ‘reverse psychology’ variant of ‘You wouldn’t dare!’, which results in the same outcome. 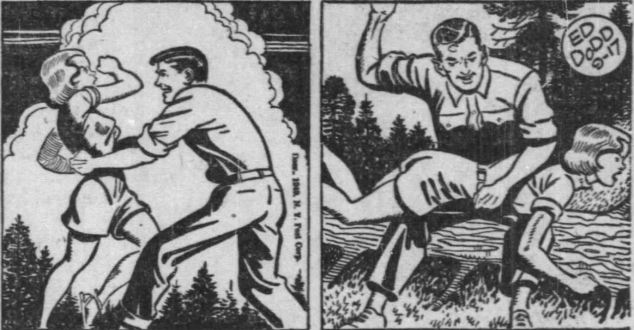 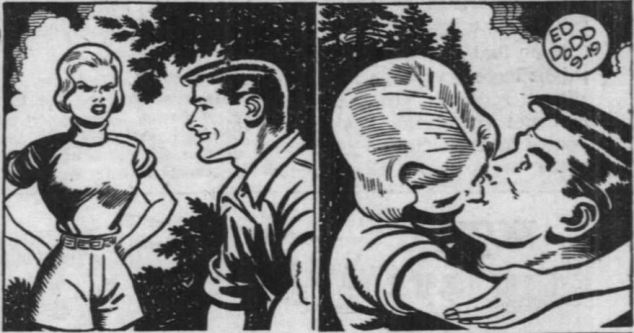 The story has a few more twists before the dollars are deposited, but for our purposes what matters is that this is a straightforward punishment spanking that only becomes welcome to the recipient after the event, for familiar reasons of sexual psychology that we have considered elsewhere.

So the customary feminine response to the threat of a spanking is to discourage, not to invite: Merete Clausen’s ‘Yes, please’ is anomalous, and innovative. But it was not completely unprecedented. The first character in cinema history to respond to a spanking threat by asking in direct, unambiguous terms for that threat to be carried out, may well have been Jeanne DuBois, the first of the two title roles in the otherwise undistinguished ‘B’ Western Beauty and the Bandit, deep in the world of the ‘old normal’ in 1946.

She was played by Ramsay Ames.

Here she is at a beach party a few years before she made the movie, showing off one of her qualifications for the role:

And here she is playing Jeanne,

who is one of only a very few movie heroines who are spanked twice in the same film.

This is part of a series about the adventures of the Cisco Kid (Gilbert Roland), a Western Robin Hood-style defender of the poor from those who would exploit them – which in this movie includes Jeanne. She’s a Frenchwoman who has brought cash to California to finance a corrupt land deal, which Cisco disrupts by substituting stones for silver. The complication comes from Jeanne’s emotional and sexual reaction: she falls for Cisco and tells him he can keep the money, so long as he also keeps her. He’s unimpressed by her lack of sound moral principle, but she insists that she is only being the businesswoman her father taught her to be. And the introduction of paternal training into the conversation takes it in a new direction.

‘Did your father ever spank you?’ he asks her. ‘Never!’ she retorts. And without another word, he puts her across his knee:

There are several things of note here. The first is that he pauses after the first six rapid-fire slaps to upgrade from the palm of his hand to that flat piece of wood. Along with the resounding, high-impact soundtrack, this underlines that it’s a particularly hard spanking, hence her vocal response, from ‘Ow! Stop it! That hurts!’ to ‘Let me go! Let me go!’ After another 14 whacks with the wood, the scene fades out, leaving it open just how long the spanking continues afterwards. Everything makes it clear that this is not a spanking that is in any way desired or enjoyed by Jeanne.

The next day, they have a further conversation about his commitment to the peasants, her desire to make a commitment to him and his total lack of interest in settling down with her. This results in a petulant stream of ripe insults from her, and a languid question from him: ‘Do you want me to give you another spanking?’ 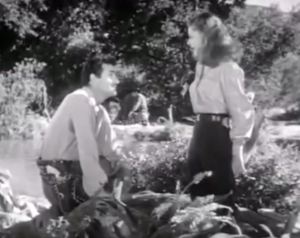 And her reply is meaningful, and perhaps historic:

This time the slaps are by hand only and don’t have quite the same percussive sound, and the scene is already fading out as she pitches forward over his knee. The most memorable thing about it, taken purely on its own terms as a spanking, is the shrill shriek she gives as the picture goes black. But what really matters is that, shriek notwithstanding, this is something she actively and overtly wants, and explicitly asks for. That’s why, unusually, she gets spanked twice: there has been a change in her attitude between the first and second spanking, not unlike Toni Calhoun’s retroactive transformation from ‘Don’t spank me’ (to quote what she means rather than what she says) to ‘I’m glad you spanked me’ (to translate only one element of the kiss’s meaning). Only after they have actually been spanked do they realize that, at some level, they liked it.

All of this takes place firmly within the bounds of the ‘old normal’: the spankings are all punitive acts, and there is no suggestion that the recipients take any direct physical pleasure from it; Jeanne’s first spanking is clearly hard and painful, and Toni is gingerly rubbing her sore bottom afterwards. But neither scene excludes the possibility of a romantic, even sexy overtone: that’s a recognized part of ‘normality’ too.

What’s new and ground-breaking about the Piger i Trøjen 2 scene is how that customary balance is reversed: this is, in a completely mainstream context, a happily married couple at play, and the suggestion of wrongdoing for which she deserves to be spanked, is just part of the game, merely a thin pretext for something they want to do together for wholly different reasons. And for spanking, that was going to become normality, as we shall discover next time.

One thought on “Yes, Please”