Why do men like watching women’s tennis? Some will speak of the skill of the players and the thrill of the competition, and that’s all very high-minded. But let’s be honest. The reason most men enjoy women’s tennis is…

That illustration cleverly combines the two big Wimbledon ladies’ scandals of the middle of the last century. In 1949, eyebrows were raised when 25-year-old American contestant Gussie Moran played in a short skirt that flew up to show her lace-trimmed panties – a first for women’s tennis that got her into trouble. 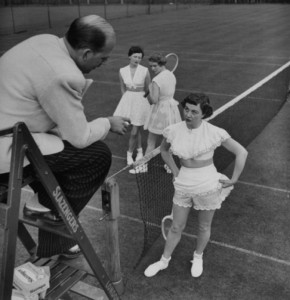 She was roundly rebuked for ‘vulgarity’ and questions were asked in Parliament. But the crowds and the reporters loved her, arguably for reasons quite unconnected with tennis. Frillies became standard wear for tennis ladies…

… even when in some other respects they aren’t properly dressed for the court:

Meanwhile, Gussie Moran became a celebrity. Photographers wanted to take her picture whether she was on court or off – even on washing day!

She also landed a role in a Spencer Tracy-Katharine Hepburn movie, Pat and Mike (1952), playing … herself! The studio publicists duly achieved maximum value by asking her for a twirl:

And a photo from that shoot gave our illustrator his pose.

Now we fast-forward thirteen years to 1962, to find another lady contestant in trouble because of her panties. This time the miscreant was 22-year-old Brazilian Maria Bueno:

And her crime? She was wearing pink panties! (And there’s our illustrator’s other source of inspiration.) Wimbledon had a strict dress code: contestants had to dress entirely in white. After Maria’s transgression, the rule was clarified: this included the lady players’ panties!

It’s an image that has been much quoted, notably with the also callipygean Kylie Minogue:

It has been parodied, notably for this witty West Yorkshire Playhouse poster image for its 2007 production of Casanova:

But some of its many celebrity imitators seem mysteriously reluctant to remove their panties! 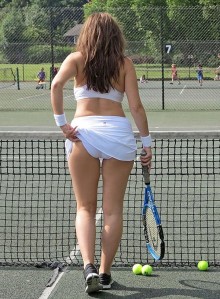 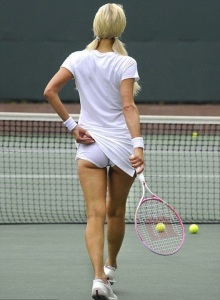 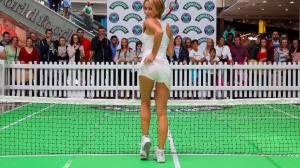 And it was also in 1976 that we came closest to something that would really be worth watching on the Center Court, thanks in no small part to the popular British player Christine Truman.

That year, Wimbledon’s lady contestants were up in arms. The reason? The differential prize money in the men’s and ladies’ championships. The top ladies were only getting 80% of the money awarded to the winner and runner-up of the men’s championship, and that wasn’t on. Leading the protests was 21-year-old World No. 1 Chris Evert:

The militant players backed up their demands with the threat of a boycott: if the ladies’ prize money wasn’t made equal to the men’s, Chris and her fellow protesters would be sitting out the 1977 tournament, 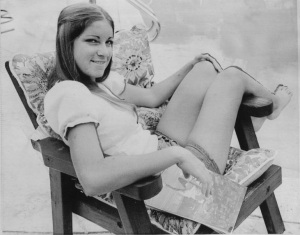 Enter Christine Truman, who had retired from play the year before and was just embarking on a second career as a tennis pundit. And if she had her way, Chris wouldn’t be sitting out anything for a while. She opined that, for leading the protest, Chris Evert should ‘have her bottom spanked very soundly’. She went on to explain at greater length:

‘Chrissie, or anybody else in tennis who asks for more money, needs to be spanked. This is grasping, sheer greed. And to talk of a boycott is just stubbornness. I have no sympathy with them whatsoever.’

The story was picked up by a grateful British press:

Meanwhile Chris Evert stormed on to win her second Wimbledon singles title, and the great Wimbledon Ladies’ Rebellion of 1976 fizzled out.

The 1977 championship went ahead, with Chris Evert on court – though she was knocked out in the semi-final after a metaphorical spanking from British player Virginia Wade. Though I suspect a spectator or two might have preferred to see her getting a literal spanking – and, of course, since it was Wimbledon, on the seat of her frilly white panties! 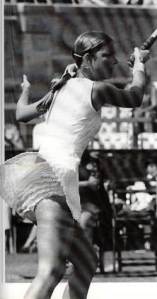 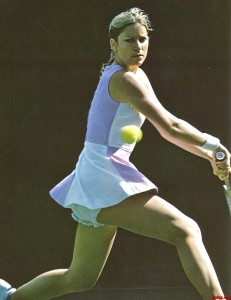