We’re off to Africa today, to visit the mighty lord of the jungle. No, not the one you think. After the runaway success of Tarzan, 1940 saw the debut of another jungle hero in the first issue of Jungle Comics: Kaänga, ‘the mysterious white man of the jungle’. In the first story, Professor Mason and his daughter Ann are on safari but fall foul of an evil slave trader. Kaänga rescues her and brings her back to his jungle home, where she teaches him enough English to explain his history: his father was killed by natives, and a benevolent African took care of the orphaned toddler.

‘Me meet more kind jungle people. Me grow up among them. Learn jungle ways, and soon forget white man’s ways and talk.’

Ann’s response to that:

This plan does not go well: Kaänga himself is captured by the slave trader, and when he escapes, he decides to stay in the jungle. Ann believes she too must go back to her own environment and continue her father’s work; but in subsequent adventures she keeps needing to be rescued by Kaänga, and after a while she moves into his cave as his ‘mate’, with as little adverse comment as was directed at the cohabitation of Tarzan and Jane.

But Kaänga wasn’t entirely ignorant of ‘white man’s ways’, as we see in a couple of stories from 1947. We get an example of his and Ann’s domestic arrangements in ‘Skulls for the Altar of Doom’, when she wastes her time on fortune-telling with beads and neglects her kitchen responsibilities: 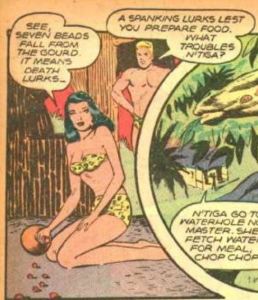 No spanking follows on that occasion, but it’s another matter in ‘Blood-Moon Over the Whispering Veldt’. In the previous adventure, Kaänga is enslaved by Princess Valla and saves her from an unworthy suitor, but declines her offer to become her consort: ‘A great honor, but one I must refuse. I have a mate already in my own land.’ She manumits him on condition that he wears her bracelet always. That sets up the initial situation in the ‘Blood-Moon’ story: jealous that he is wearing another woman’s trinket, Ann takes herself off, sabotaging his canoe to inhibit pursuit, and he swears, ‘this simple-minded woman, Ann, shall feel Kaänga’s wrath’. And, shortly afterwards, ‘I will track down this female imp and give her the punishment she deserves.’ In other words, Ann’s going to get a spanking!

Things don’t go entirely as expected, because of the presence on the veldt of Professor Lynn and his daughter Betty, who have come to photograph a rare gorilla mating ritual. 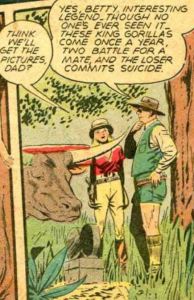 The upshot is that Kaänga catches and spanks… the wrong girl! And that reveals another little-known fact about our hero: he must be blind.

No, not really, but how on earth could Kaänga possibly mistake Betty for Ann? There is an answer to that, albeit not an especially satisfactory one, and we can start to see it if we trace the development of Ann’s look across the series.

At first, when she’s still an explorer in her own right, she wears sensible jodhpurs, as seen here in a strip drawn by Charles Sultan. (Note also the temporary change of hair color, though that’s not relevant to the point I’m developing.)

Once she has moved in with Kaänga, she routinely wears something closer to his trunks, as seen in the work of artist George Tuska:

Alex Blum took over drawing duties in 1941, which meant a change of swimsuit color.

A few months later, another change of artist (to Dan Zolnerowich) saw Ann’s attire begin to stabilize into its long-term form:

Throughout the 163-issue run of Jungle Comics, all the way to 1954, the covers took a ‘good girl art’ approach to Ann. 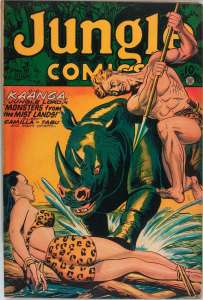 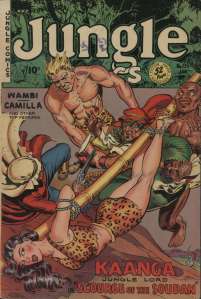 This gradually filtered into the strip itself, as seen in these splash pages by Saul Rosen and John Celardo (who also drew the ‘Blood-Moon’ story and the spanking panels we’re going to enjoy later):

Further evidence is provided by this selection of panels by Celardo, Jim Mooney and Maurice Whitman: 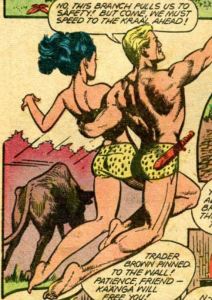 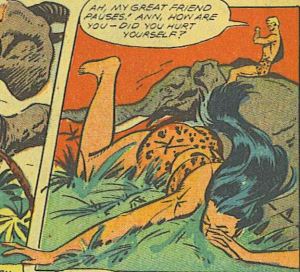 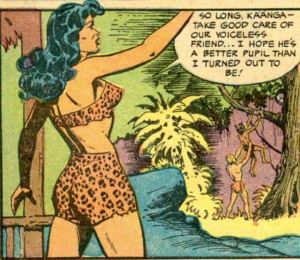 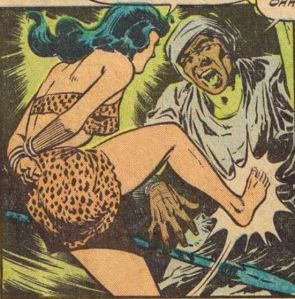 So when it comes to Ann Mason, what most readers of the strip are mainly looking at is not her face or her dark hair but a rather fetching jungle outfit. And there’s the source of Kaänga’s confusion in the ‘Blood-Moon’ story.

When Ann first sees Betty, she envies her clothes, which are not all that dissimilar to what she wore herself in the early months of the series.

After she saves Betty from a leopard, she asks to be allowed to wear her outfit:

A nude scene establishes that the swap has taken place:

Now let’s revisit the issue of ‘spot the difference’, bearing in mind that clothes make the woman:

So when Kaänga encounters a girl in a junglekini, blonde though she is, he unthinkingly takes her for his quarry, and spanks her.

Professor Lynn fires at Kaänga, causing him to fall off a cliff into the river, and then Betty realizes that he must have mistaken her for Ann – which seems to make both of them decide the spanking was acceptable behavior after all. 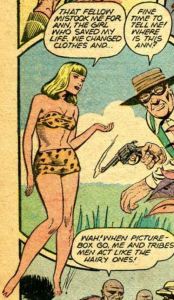 In fact, the only person who takes a different view of it is Ann herself, after she has been saved from the villains (yes, there are villains, too), and when Kaänga finally, in the very last panel, does what he has been out to do all the way through: 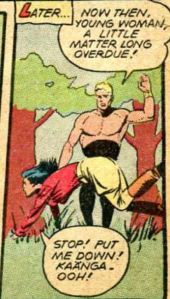 You can read the entire run of Jungle Comics here, along with a whole lot else.

One thought on “﻿Kaänga Rules!”